WINTER FIRST TEAM REPORT
It has been a pleasure to captain the men’s team for the last year – my thanks to Simon for passing on such a committed team and I’m pleased to say we’ve had another successful year.
​
Looking back to last summer we had three teams promoted in their respective leagues including two teams winning their Chaucer divisions. We’ve just started the new summer season in the Chaucer and ADLTA leagues and all teams are competing well in their first few fixtures.

We finished the winter season in March and again both our A and B teams gained promotion – to the ADLTA premier division and division three. Well done to all who played their part in another successful campaign.

Particular praise for Ian Simpkin who was the highest ranked player in division one and to Paul Jameson who answered a call to play at 8am on a cold Sunday morning after half of our team was struck down with man flu. Paul helped win 8 valuable points that proved crucial at the end of the season.

The Tuesday night match practice sessions continue to be popular and our rising star and trainee coach Justin Worthy has run a few training sessions, with hopefully more to come in the summer.

The summer tournament is well underway and all competitions have been popular with an increase in the number of participants which is great to see.

My thanks to the committee for making my job as easy as possible, especially Glenn and Phil Cadman for helping to run our B teams and particularly Phil for organising all our fixtures throughout the year – must be quite a challenge with our new men’s teams.

After all our recent promotions the standard of tennis has improved hopefully we can hold our own.


View our progress on the ADLTA and Chaucer websites.

​LADIES CAPTAIN’S REPORT 2018/19
As you know I’ve been giving these reports for many years and each year it seems to me to be a greater honour and privilege than the year before.  As a small club we appear to always challenge the larger clubs with our fighting spirt and this always ends up with the right results.

SUMMER  LADIES WEEKEND CHAUCER LEAGUE 2018:
As usual the tennis is of a high standard playing clubs a little nearer to home.
We managed to come a close 3rd in this league which is a great achievement considering we don’t have the pool of players like David Lloyd who were top of this division, but as always, enjoyable tennis against them and all the other clubs.

WEST SURREY’S CHAMPIONSHIPS  SUMMER  30TH JUNE  2018:
LADIES SINGLES:  Lena & Mel battled it out once again with Lena being victorious in 2 sets.
LADIES DOUBLES:  This was contested over 3 exciting sets with Lena & Alix Lidbury being the winners over Mel & Sally Crathern.

Congratulations to all finalists.

SURREY WEEKEND LADIES 2018/19:
We are in Division 9 West we have been in this Division for 2 years but hoping that we may get promotion for next year as we are runners up to Richmond this year.

WEST SURREY’S CHAMPIONSHIPS WINTER 23rd MARCH 2019
This year I was relieved that the weather was considerably better than last year’s snow, sleet and cold wind, but a little disappointed that we had very few spectators to watch the excellent finals.

LADIES DOUBLES:
A very exciting close match with Lena & Mel edging out Claire & Jo 3-6, 6-2, 7-5. Well played and thank you for keeping us on the edge of our seats.
My thanks go out to my enthusiastic ladies who always play if other commitments allow so Lena, Mel, Emily, Claire, Paola, Alice, Jo, Judith, Sue & myself my heartfull thanks.  Special thanks go to Lena for being our AMAZING Mid-Week Captain of the year and I’m reading her report now.
Denise Woods
Ladies Captain  (April 2019)

The mid-week ladies team has had a successful year playing lots of great tennis.

SUMMER CHAUCER LADIES MID-WEEK:
We are pleased to announce that the mid-week ladies topped the table beating their closest rivals David Lloyd Woking by 4 points this year.

WINTER SURREY’S MID-WEEK:
The mid-week ladies team were promoted last winter and now in the top division which is a step up in level and we finished a respectable joint 3rd on points and rubbers, but 4th position overall due to winning less sets.  Our season was plagued with injury with Emily and myself (Lena) being out much of the season.  We started slowly but clinched a must win against David Lloyd Raynes Park on their indoor courts and finished with a highly contested match draw against Westside Wimbledon who before us were unbeaten and are the division winners.  Whilst we didn’t win the league we certainly provided the best and most delicious lunches!
​
My thanks go to the following team players, Jo, Claire, Mel, Emily, Alice, Paola and myself (Lena) and Denise & Emily for supporting and being ever present. 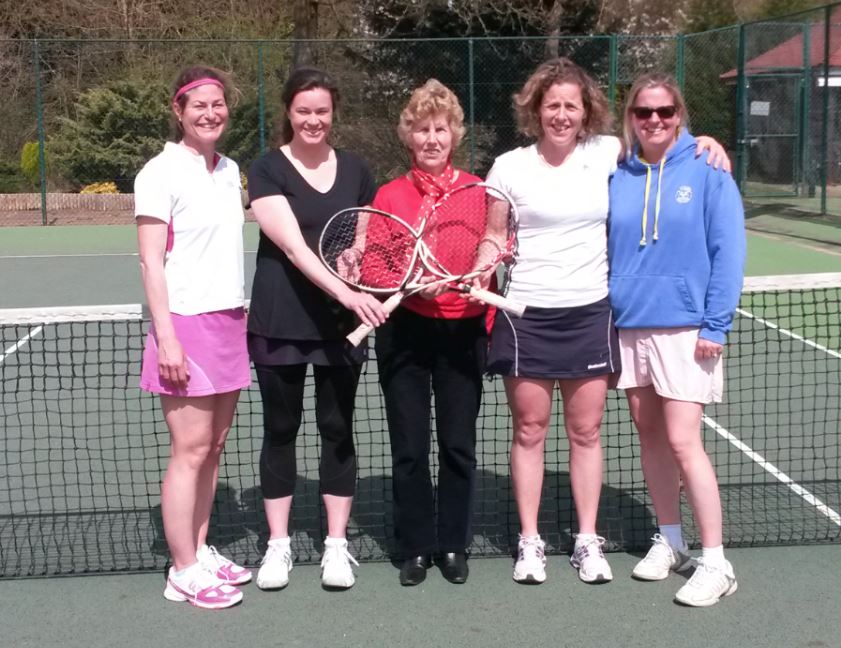 Mixed Captain's Report for 2018/19
PAUL DUDLEY
​
It is a pleasure to present my first Mixed Captain’s Report at this year’s AGM.

Firstly can I begin with thanking my predecessor David L-Horsfall for handing over the teams’ organisation in such good order. Thank you for his efforts while he was the Mixed Captain on behalf of the Club. Also, many thanks to Phil Cadman for his organisation in arranging the fixtures for the coming season.

Secondly, let me say a few words about the two Mixed team’s performances over last year’s Chaucer Summer Tournament. A big thank you to all of those players who played for both teams throughout the season. There were some very exciting and tight matches played to an excellent standard throughout the season.

The Mixed 1 team played very well over the season and managed to win every game of the division, therefore coming top of Division 2 and being crowned deserved champions.  Very well done to Lena, Mel, Claire, Ian, Phil Rivet and Duncan for their fantastic efforts. Best of luck to the team for the season ahead in Division 1.

The Mixed 2 team played well also, however the league was very tight and we narrowly missed the chance to be promoted. We hope to go one better next season while competing in Division 3. Again, many thanks to all of the players, Denise, Emily, Alice, Judith, Sue, Andy, David and Phil Cadman for their commitment and efforts.

Finally, let me conclude by saying a big thank you to all of the players and fellow members for their support for both the Mixed Teams and I wish the players my best wishes to have fun and play some good tennis in their matches over the coming months.